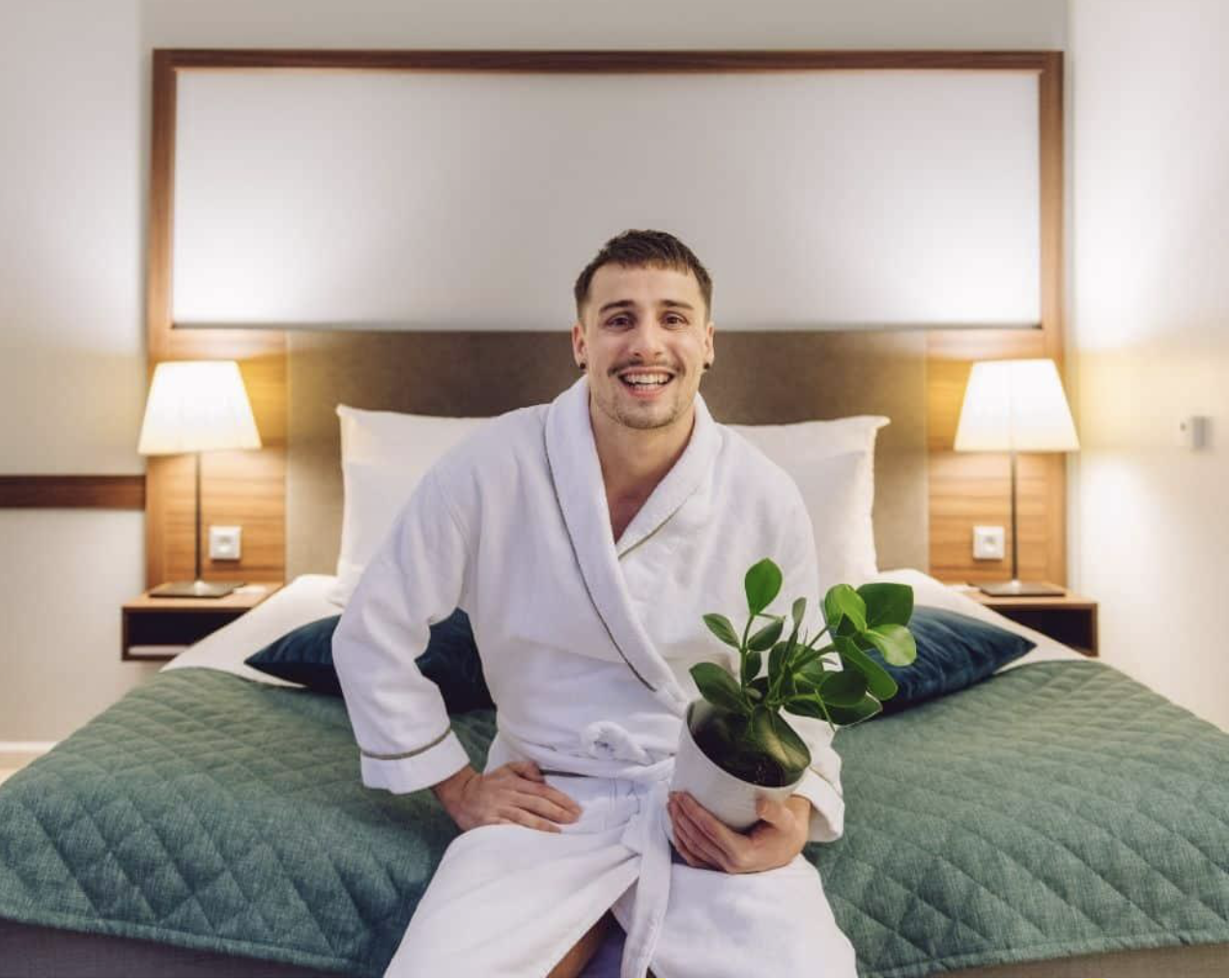 In February 2019 Joonas Pesonen (@pesojoonas)  packed his bags (including his 40 indoor plants) and moved to Clarion Hotel Helsinki for a whole year. This impressive and value-based collaboration grew the hotel’s visibility enormously while exceeding expectations and set goals. In total, Joonas’ #YearInClarion posts reached over 2 million views and potentially up to 20 million readers through earned media during 12 months. Earned media visibility doubled from the year before. The value of this collaboration turned out to be almost 800 000 euros. Both Clarion and Joonas also grew their following in social media channels significantly throughout the year.

The main goal for this collaboration was to strengthen the Clarion brand in Finland and reach new target groups through influencer marketing. The idea for this collaboration was inspired by a brand analysis and marketing strategy made in 2018: Knowledge of Clarion was at a good level especially around Helsinki, Espoo and Vantaa, but it needed a boost in the target group of young adults. It was also important to clear the Clarion brand based on their vision and values – energetic, passionate and responsible.

In addition to strengthening the brand, this collaboration also had other goals. One of them was to include the influencer into the planning and developing of Clarion Hotel’s service design – while making the most of a long term collaboration. #YearInClarion would also be an efficient way to reach new target groups through new channels and content.

From the beginning PING Helsinki’s role was to be an active part of the collaboration: developing and creating the campaign with Clarion Hotel Finland’s team. PING Helsinki also took part in choosing the right influencer for the campaign and in the production of the launch of #YearInClarion and announcing the winner -events.

”After almost a year lasting collaboration coming to its end, we can say that the results of a  brave, long term influencer marketing have been more than we ever expected. In addition to natural and brand suited content for the desired target group, we’ve also received valuable information that’s going to help us develop our services.” Outi Hartman, Marketing Manager, Clarion Hotel Finland

“Our followers are clearly interested in the #YearInClarion content. The amount of earned media has doubled compared to the year before. According to the brand analysis from the beginning of the collaboration, the knowledge of Clarion has grown within the target audience. Service design projects have also been well received by our customers. We’re so happy, how together with Joonas we’ve managed to create fun and interesting content!” Jaana Matikainen, General Manager, Clarion Hotel Finland.

#YearInClarion was launched at an influencer party thrown by Clarion at Clarion Hotel Helsinki’s Sky Room bar, in november 2018. During the party a competition was announced. The winner would get to be a part of a brand new influencer collaboration, a year long hotel adventure filled with possibilities. Everyone interested had two weeks to apply. 26 applications came through and after a qualifying round, interviews and the final, the best match for Clarion was chosen, Joonas Pesonen, known as @pesojoonas.

The influencer’s identity was published at Matkamessut (travel expo) in January 2019 in connection with a publishing party for other influencers. The goal for the publishing was to get media attention for the collaboration. Clarion staff were excited since the beginning of #YearInClarion collaboration and gave Joonas a warm welcome to the Clarion team.

At the beginning of the collaboration, a natural subject for content creation was moving to the hotel. For example, the influencer took each and everyone of his 40 indoor plants with him. This has been considered very inspirational. The further the collaboration proceeded, the more versatile the content became. Some of the content was created as planned, paid partnership, but most of it was the influencer’s own spontaneous content. Afterall the hotel was his home.  Everything from trips to other nordic Clarion-cities to different events and projects, without forgetting normal monday to friday life, have played a big part in the influencer’s content.

During the year, influencer based service design was also made use of. For example on how to deal with food waste. Joonas’ amazing followers also helped and came up with ideas. As an example of the results of service design, Clarion Hotel started using the ResQ Club App to reduce food waste.

Executing versatile, long term and successful influencer collaboration takes a lot of hard work and continuous progress: management sparring, conversations and creativity on many levels. The results of #YearInClarion were monitored through the chosen metrics, which allowed us to improve the collaboration throughout the year.

Check out our other cases